This is a powerful message from LAPD officer Navi Aicarg. I appreciate all the Latinos and Latinas who have come forward to share their feelings about Donald Trump and many with messages directed to him. 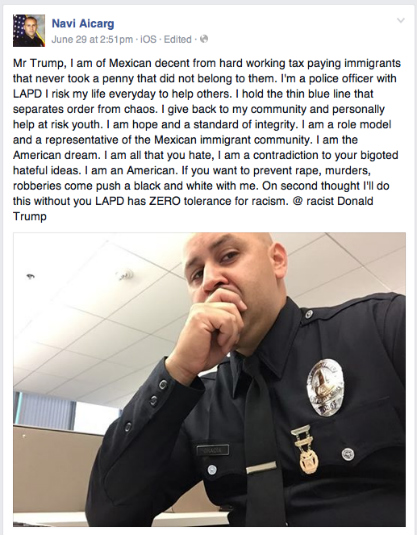 Rebecca Aguilar is a freelance journalist and founder of Wise Latinas Linked on Facebook and LinkedIn.


Posted by Rebecca Aguilar at 2:54 PM No comments:


You can't insult Mexicans and get away with it, even if you are one of the richest men in the country. Even if you are running for President of the United States.

Wise Latinas didn't hold back their opinions on Facebook about Donald Trump after he called Mexicans who come into this country "rapists" and "killers."  While NBC and Univision appear to be cutting ties with Trump, Latinas on Facebook believe Trump can be put out of business and politics.

It is not just the pageant. All of us Latinos and Latinas need to boycott every business that benefits this evil, racist man. His hotels, casinos, restaurants, everything! We must send him, and all other like him, a message. -A Marcos, Texas

Childish bored millionaire who has nothing better to do...but make a fool of himself.....IDIOTA -- V. Muniz. Texas

He will realize what he has done when his pockets start to feel less fat. Trust that a nation without the Latino buying power and voice is no nation at all. He began it but we Latinos will finish it!--I. Davila

I've never been more motivated to encourage Latinos to vote. As bad as Trump is behaving in public, there are many more who would like nothing more than to quiet Latinos. -- M.Salazar, Texas

I hope that many become inspired and 1. Those working for him quit. 2. No one watch the Miss USA pageant 3. No one participates or purchases any of his franchise. That would show a strong message --J.Rivera

Poor guy, he just doesn't know much about the real world. All his millions will not buy him a seat to the presidential chair.- M. Ramirez, Texas

We Latinos have to make a statement that you can't just insult us and get away with it. Then it will have a ripple effect and society will treat us the same way. We have to show how powerful we are as consumers and voters. Because right now, that is NOT respected. - M. Rascon

PETITION DRIVE TO END "THE DONALD"

If you want NBC to cancel Miss Universe, Miss USA owned by Trump and the show he produces, The Apprentice. Here's a petition, just follow this link Cancel Trump


Rebecca Aguilar is the founder of Wise Latinas Linked, the largest Latina networking group on Facebook and LinkedIn.


Posted by Rebecca Aguilar at 11:45 PM No comments: